If you want to make a quick dish for diners, you’re probably out there looking for the tastiest, best meat you can find. Well, in that case, you might want to try making something with Canadian bacon – it’s tasty and doesn’t cost a lot. If you’re not familiar with it, don’t worry, because today we will teach you how to cook Canadian bacon and properly prepare dishes with it.

But first, let’s answer some of the questions you might have. 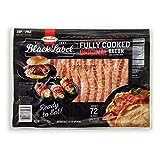 What Is Canadian Bacon?

A lot of you might not be familiar with Canadian bacon and don’t know what it is exactly. It’s not just any type of bacon that comes from Canada, which might be the first thing that came to your mind. No, it’s a bit more complicated than that, but not too much.

For starters, it’s not bacon in the common sense of the word. It is a cut of bacon, but it is cut from the back and, because of that, it tends to taste a bit more like ham than regular bacon due to being leaner. It’s not quite ham either, though, so you could say it’s somewhere in-between the two.

So, it is bacon cut from the back and a bit from the belly. It’s also smoked, cured and completely cooked, so it’s ready to eat straight away. You will usually find it cut in completely round medallions. Despite its name, most of the Canadian bacon in the US isn’t from Canada at all. Also, in Canada, it’s simply known as “back bacon” or something similar.

But what are all the ways in which it differs from regular bacon or ham for that matter? Let’s find out.

When you look at Canadian bacon, it will usually look more like ham, but it is called bacon for a reason – it’s not as lean as ham is. The main difference between the three comes in this – the amount of fat in each one. Ham is the leanest with only around 6 to 7 percent of fat, while Canadian bacon can contain up to 10 percent of fat. Bacon, of course, is made up of a whopping 40 to 50 percent fat.

Due to this, cooking and preparing these products is quite different. But another reason for that is the way they’re sold. Not all hams are ready to eat straight away, and the same goes for bacon, but Canadian bacon is almost always smoked, cured and pre-cooked. So be careful not to prepare the same way you would prepare a raw cut of ham. Canadian bacon also only comes in sliced form, like most other types of bacon.

There’s more to the difference in nutrition than fat content, though. Ham obviously contains fewer calories than bacon, but Canadian bacon has them both beat in that regard. It also tends to contain fewer carbohydrates, cholesterol, and water than prepackaged ham. Values differ when it’s compared to raw ham. Canadian bacon also has more proteins in it than ham does and way more than regular bacon.

Of course, all of these differences stem from the source of the meat. While they are all made from pork, ham is usually cut from the butt and shank end of the pig while bacon is taken from the stomach. Canadian bacon is made from loin and back cuts of meat.

There you have it – the lowdown on the differences between these three types of pork. Now that we have all that covered, we can move on to the best way to cook Canadian bacon.

As we already mentioned, Canadian bacon is pre-cooked and can be eaten straight out of the package – so why cook it? Well, the main reason for that is because frying or roasting it can improve the taste or make it mesh better with other ingredients in a dish. It can be paired with a wide variety of foods, but it’s not always best when used raw.

So, today, we will cover a few different methods that you can use to cook your Canadian bacon and prepare it for use in some delicious recipes.

Frying It In A Pan

For this method, you need to start with heating up the pan on the stove to medium heat. You only need to place a little oil in the pan and wait until it heats up as well.

Then, carefully place the slices of Canadian bacon inside and leave a bit of space between them. Cook them for around two minutes on each side.

If that’s not enough, continue cooking until the bacon turns crispy and brown, then remove it from the pan.

That’s about it; now you have some nicely cooked Canadian bacon on your hands, you just need to let it cool before serving it or using it in various dishes.

For this method, you will need an oven which has a broiler function. To start, you should set it to a high broiler setting and place the rack a few inches away from the heat source.

Next, you should prepare a baking pan and place the slices of Canadian bacon on it, without stacking them on top of each other. You can brush the slices with some marinade, maple syrup, or whatever else you may like.

Now you can put the baking pan in your oven and broil it for around 4 minutes. Once the slices turn golden brown and start getting crisp on the edges, they are done. You can take them out and serve after they cool.

That’s quite easy, right? Well, we have another cooking method that’s maybe even better.

Sous vide cookers are popular these days, and this method uses one of these machines to achieve an incredibly juicy and tender result that you can’t get any other way.

First, set your sous vide cooker to 145 degrees Fahrenheit, no more or less. That’s the ideal temperature which ensures that the bacon doesn’t come out too dry or too soggy and raw.

Then, place the Canadian bacon slices in a sous vide bag and put it in preheated water in a large container. Let it cook for at least 6 hours, but you can cook it for up to 10 or 12. If you don’t have a sous vide bag, you can put the slices straight into the water, but you should use a bag for better results.

When the bacon is cooked, you still need to sear it. You can do this by preheating a large skillet or pan over medium-high heat with only a little oil inside. Place the ham inside and press it down with a spatula for around a minute or two at most, only on one side.

Now you can serve it immediately; you shouldn’t wait for it to cool down.

There you go, three nice and easy methods for cooking delicious Canadian bacon! Did you like them? Do you have some methods that you prefer and we didn’t mention? What are your favorite recipes that use Canadian bacon? Please feel free to comment and share this article, and we hope you have a nice day!